Next post
'First year crucial for dads' involvement in childcare' 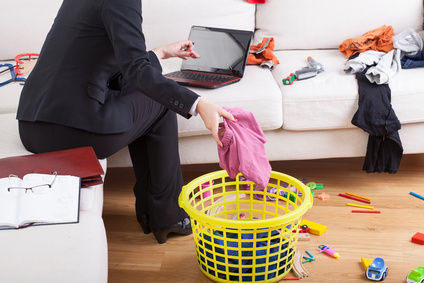 We are down one Spanish exchange student, which means everyone can now fit in the car. Daughter two’s Spanish exchange student left on Thursday and daughter two is a bit relieved. Even though she virtually didn’t speak to her, she felt the pressure to host, she said. I am not sure if her exchange partner enjoyed her time in the UK or not. It was difficult to tell as she barely said a word. I asked what her highlight was and she replied Westfield shopping centre.

This week has been taken up with more logistics planning than usual as a result of the two extra people in the house, all with different pick-up times and all needing a packed lunch. It feels a bit like we are running a small hotel with chauffeur services thrown in.

The other morning I was doing the packed lunches, making the breakfast, washing up, feeding the kitten and coaching only son on his science week project [man-eating sharks of the world]. Daughter three, who had announced at around 8.45 the night before that she had a food technology session and required emergency yeast, was getting her equipment together. Daughter two was talking about why she was going to avoid an award ceremony where she had been selected for a prize for technology. “I’m going to send a message like they do in the Oscars, mum. xx is very sorry that she cannot be with you tonight. She is busy creating a giant computer that will take over the world. She wishes you all a great evening.” Daughter one was castigating her mother for sending her philosophy teacher a plea to let her swap courses [even though she wants to].

I sprayed assorted people with sun cream, grabbed bottles of water and left. The car has a small crack on the passenger side of the windscreen, but Autoglass was coming later. “I need to be on time,” I heard myself saying, knowing deep in my heart that this was a futile statement. Sure enough, everyone got in the car 10 minutes later than the deadline I had given. We got five minutes down the road. “I’ve forgotten my blazer,” said daughter three.  We were at around 30 degrees Celsius at the time. I returned home because apparently you get detention if you don’t have a blazer. Only son mentioned that he would like some school shorts [his old ones are too small]. Eventually we got to the school.

Daughter two had mentioned vague plans to spend a couple of hours in the park with her exchange partner and others, not talking. “I’ll text you,” she had said. “Warn dad he may need to pick me up.” At 3.35 I spotted a message on the family whatsapp. “Going to parje. Pick us up on the way home.” When I got to the primary school late – of course – only son was the only child left in the class. His campaign for shorts had stepped up a notch. He was standing in the centre of the room with his trousers rolled up to the knee.

At the secondary school, daughters one and three were sheltering in the shade. I asked where daughter one’s exchange was. “Not sure. I couldn’t find her,” said daughter one helpfully. She got a text message. Her exchange partner was at at the train station. She had bought a return ticket, which was great, except we live half an hour from the school and were planning to take the other exchange student out for a farewell meal at Nando’s half an hour in the opposite direction. In the end, through a series of miscommunication and phone-related issues, daughter one’s Spanish exchange rang to say she was in an entirely different location at a tube station just as the food arrived.